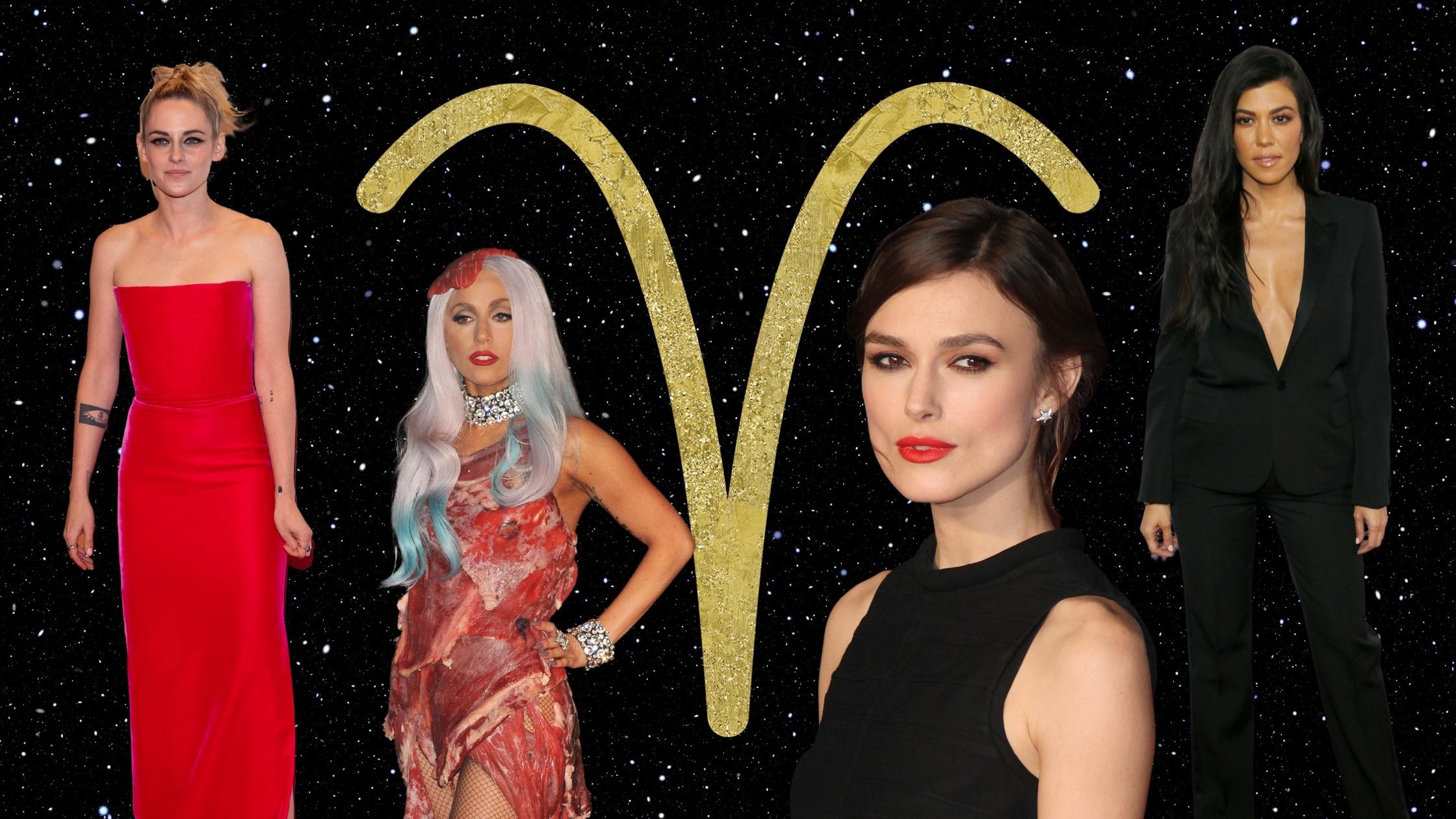 If you were born between 21st March and 19th April, then your zodiac sign is Aries The Ram.

Ruled by Mars, the planet that represents action, conflict and passion, fiery Sun in Aries people like to act first, think later.

The zodiac symbol for Aries is The Ram, illustrated by a ram’s horns glyph on astrological charts.

Leading the zodiac pack, Aries The Ram is a bold, competitive sign that loves the excitement of new beginnings and the joy of winning.

Think battering ram and you’ll be somewhere close to how a Sun in Aries person likes to live their life.

Although this zodiac sign is known for having a big personality, the Aries The Ram constellation is the 11th smallest in the zodiac.

Were you born with the Sun in Aries?

The Aries date of birth can change slightly by a day or so each year, depending on when the Sun enters and leaves Aries.

If you are born on the cusp of Aries dates (close to the first/last dates of the sign), it’s best to check your exact time of birth on your natal chart to see where the Sun is.

Aries is the first sign of the zodiac and being first is a position of extreme importance to this fire sign.

In life, Sun in Aries people like to lead the way and are most comfortable in pole position.

Although their will to win is strong, they don’t believe in winning at all costs if it involves underhand tactics.

Their winning game is strong, to the point of unbearable, as they lord it over the competition they’ve brushed aside.

But their losing game is notoriously bad.

Baby rams throw their toys out of the pram and this is a lifelong theme for adult rams who loudly protest when they lose.

Upturned Monopoly boards, red card offences and dramatic door slams are go-to tantrum tactics of an Aries that ends up on the losing side.

If you want to know why an Aries is so competitive, the answer lies layers beneath that hard exterior.

Insecure Aries need the reassurance that winning brings, otherwise they question if they really are good enough.

For life, love, the universe – you name it, Aries is intent on winning at it, as much for their self-esteem as anything else.

Confidence is an Aries’ best form of emotional armour and it’s in danger of being eroded if they lose even the smallest of battles.

This is the reason you won’t find an Aries entering a game they don’t think they can win.

Their fragile egos can’t take the thought of losing, however small the stakes are on the surface.

Placed at the beginning of the horoscope wheel, Aries is a sign that likes to start things.

Coupled with their fire sign energy, you could say they are the original ‘firestarters’ of the zodiac!

Their spark of genius is undisputed when it comes to bringing new ideas and bursts of enthusiasm to the table.

However, they have a tendency to get bored easily, so they’re unlikely to finish what they start before moving on to the next best thing.

Shiny object syndrome was invented for Aries people, especially in the workplace, where their completion rate record is sorely tested the longer a project or job goes on.

Aries start projects with so much enthusiasm and ideas that they often overpromise and underdeliver.

It’s never intentional, but there’s a limit to what they’re capable of achieving, even though they don’t like to acknowledge this.

The more ambition an Aries has, the more likely they are to burn out, ultimately a victim of their own self-reliance and refusal to share the spotlight or workload with others.

There’s a childlike quality about Sun in Aries people, regardless of their actual age, and this can be both a positive and negative trait.

They leap into new adventures with the naivety of a child, throwing caution to the wind and ignoring red flags.

Act first, think later is their inner motto, which sometimes gets them into more trouble than they’d like.

Aries throws themselves into relationships, friendships and projects with a reckless abandon that doesn’t always end well.

The risky behaviour that they engage in makes them exciting to be around, as they lead others into spontaneous adventures.

Aries is a natural boss, but they achieve more when they step into the role of leader rather than dictator.

It’s rare to find an Aries that likes being told what to do, so they perform better when they’re in charge.

Being the boss comes naturally to an Aries, but they enjoy leadership more than management, due to a disdain for details.

Aries isn’t bothered about what their flock is up to as long as they know they are faithfully following their lead.

It’s important for Aries people to lead and motivate their loyal band of followers to come along for the ride.

You’ll always know where you stand with an Aries, as they prefer a straight-talking style that often errs on the blunt side.

While honesty is often the best policy, Aries has a tendency to use it where it’s not required or asked for.

The opinionated ram is full of hot takes but they don’t always fall on welcome ears.

If they could refrain from offering up life advice until someone actually asks for it, their timing would be impeccable!

An Aries is the centre of their own world.

After all, if they don’t look out for number one, who will?

The independent spirit of an Aries doesn’t welcome advice or help from others.

They’re prepared to go it alone if they can’t convince the rest of the zodiac to their way of thinking.

While this self-reliance is admirable, they can end up feeling like it’s Aries-against-the-world if they can’t learn to compromise and accept help every now and again.

An Aries will always think they are right, which can also lead to problems with other people.

They’ll fiercely defend their own position, but often to the detriment of their relationship with others.

Is it really that important to always be right?

An Aries will say yes, but others may be bored of the constant battleground created by an Aries’ unrelenting will to win even the pettiest of arguments.

Having said that, they’re not afraid to admit when they got it wrong, even if this is a rare occurrence.

When they do admit their failure, they’ll expect forgiveness from their flock and are genuinely surprised when it’s not as forthcoming as they expected.

Aries has no time for holding grudges, therefore they naively expect others to be of the same nature.

While an Aries is able to get over an argument just as quickly as they started one, other signs may not be able to move on from the fall out.

Fellow fire signs, Leo and Sagittarius, form the triangle of trouble, always bringing the party with their fun, outgoing personalities.

Talkative air sign Gemini fans the Aries flames with their own sense of adventure and limitless enthusiasm for ideas.

When it comes to the cardinal signs, Aries get on best with Cancer, who provide emotional support during their many episodes of drama.

Earth signs are a trickier proposition for Aries, but they appreciate the loyalty that Taurus and Virgo bring to the table.

The steamy combination of fire and water makes Scorpio a great love match for Aries.

Aries also mates well with fellow fire signs Leo and Sagittarius, who appreciate the ram’s passion in and out of the bedroom.

An Aries is also attracted to the flirty nature of a Gemini, though their affair could be short-lived when the initial attraction wears out.

Aries works well with their fellow fire signs, Leo and Sagittarius, resulting in a creative combination.

As a boss, Aries values employees who won’t challenge their authority but are inspired by their leadership.

Air signs like Gemini and Libra will appreciate the decisiveness of their Aries boss, while creative Cancers, Scorpios and Pisces will thrive under the encouragement of their bold leader.

Slower-paced Taurus and detail-driven Virgo might find the Aries pace hard to keep up with.

Aries and Capricorn is a competitive combination – if they work together it’s a dream team that takes things to the top.

But on opposing teams, get ready for a fierce rivalry that ends in boardroom battles.

Aquarius likes to be as individual as Aries, so this is only a good working combination if both signs respect the other’s need for freedom and autonomy.

There are plenty of famous Aries celebrities who embody the fiery spirit of this zodiac sign.

Here’s a selection of Aries singers, actors, fashion designers and models who were born with the Sun in Aries: